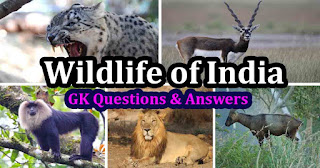 1. Which Indian state has most number of Wildlife sancturies?
Ans: Maharashtra

2. Wildlife Institute of India is situated at:
Dehradun

4. Which Indian state has most number of National Parks?
Ans: Madhya Pradesh

5. The Wildlife Protection Act was passed in India in the year:
Ans: 1972

7. Jaldapara National Park famous for the one-horned rhinoceros is in the state:
West Bengal

8. Kaziranga National Park is in the state:
Ans: Assam

9.  The Bhitarkanika Mangroves are a mangrove wetland in the state:
Odisha

10. Point Calimere Wildlife and Bird Sanctuary is in the state:
Tamil Nadu

11. Nalsarovar Bird Sanctuary is located in the state:
Gujarat

15. Manas National Park is a UNESCO World Heritage Site in the state:
Assam

This comment has been removed by the author. - Hapus

We the biggest BRS Photoshop Service As images of products are the biggest weapon for a business company. Perfect photoshop service means a lot to this professional business purpose. Do Visit to have more knowledge about unique service.