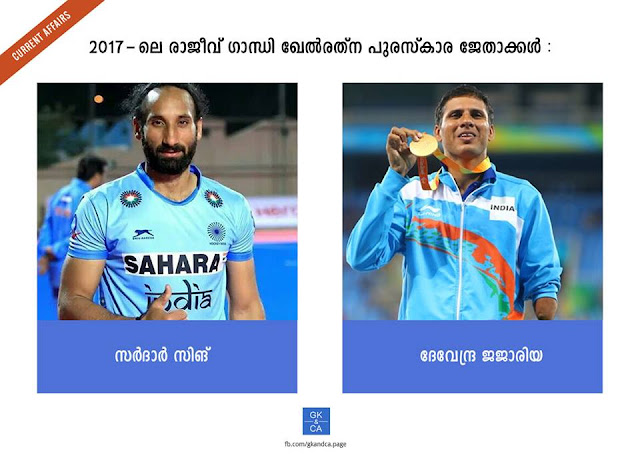 4. Who was elected as 15th Vice President of India?
Ans: Venkiah Naidu

6.  Which railway station in Uttar Pradesh is renamed after Deen Dayal Upadhyaya in a bid to revive the legacy of Upadhyaya, who died in 1968 at the junction ?
Ans: Mughalsarai

7. Which city was selected as the Venue of 2024 Olympics?
Ans: Paris

8. Which city was selected as the Venue of 2028 Olympics?
Ans: Los Angels

10. Which footballer won the UEFA Player of the Year award for the 2016-17 season?
Ans: Cristiano Ronaldo

11. Who was appointed as new Chairman of Railway Board?
Ans: Ashwani Lohani

12. Who was appointed as new CMD of Air India?
Ans: Rajiv Bansal

14. Who was appointed as new Chief Secretary of Kerala?
Ans: K.M Abraham

16. Which is the name of latest Android 8 version released recently?
Ans: Oreo

18. Which country topped the medal list in the 2017 IAAF World Championships held at London?
Ans: USA

22.  'An Insignificant Man', a film documenting the life of which politician?
Ans: Arvind Kejriwal

24. Who was appointed as 45th Chief Justice of India?
Ans: Justice Deepak Mishra