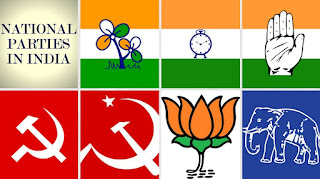 A registered party is recognised as a National Party only if it fulfils any one of the following three conditions:

Womesh Chandra Bonnerjee was the first president of the Congress.

The BJP's origins lie in the Bharatiya Jana Sangh, formed in 1951 by Syama Prasad Mookerjee,

After the State of Emergency in 1977, the Jana Sangh merged with several other parties to form the Janata Party; it defeated the incumbent Congress party in the 1977 general election. After three years in power, the Janata party dissolved in 1980 with the members of the erstwhile Jana Sangh reconvening to form the BJP.

The Bahujan Samaj Party was founded on the birth anniversary of B.R. Ambedkar (i.e. 14 April 1984) by Kanshi Ram,