Kuriakose Chavara was born on 10th February, 1805, at Kainakary in Alapuzha as the son of Iko (Kuriakose) Chavara and Mariam Thoppil.

Kuriakose Elias Chavara is called the father of literacy in Kerala.

Fr. Kuriakose started St. Joseph's Press at Mannanam which was the third printing press in Kerala and the first press founded by a Malayali without the help of foreigners.
Deepika, the oldest daily in Kerala was printed for the first time in this press (1887).
He was the co-founder and first Prior General of the first congregration for men in the Syro-
Malabar Catholic Church, now known as the Carmelites of Mary Immaculate, and of a similar one for women, the Sisters of the Mother of Carmel.


In his childhood, he attended the village school. There he studied language and elementary sciences.
He entered the seminary in 1818 in Pallipuram where Father Thoma Palackal was the Rector. He was ordained on November 29, 1829, at Arthunkal and presided over the Holy Qurbana (Eucharist)
for the first time at Chennamkary Church.

Chavara took the additional name of “Elias”, from the Carmelite tradition of his having been their founder. 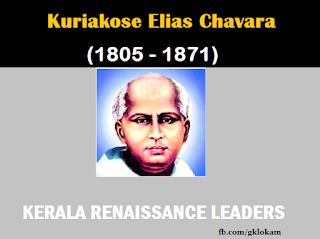 Chavara became Vicar General for the Syro- Malabar Catholic Church in 1861.
He defended the ecclesial unity of the Church, which was threatened by schism due to the consecration by Thomas Rochos of Nestorian bishops.
He worked to renew the faith in the church.
He was a man of prayer with a devotion to the Eucharist and the Virgin Mary.

He was also a social reformer,an educationist and had played a major and significant role in educating women and people of lower sections of society.

He first introduced the system called “A school along with every church” which was
successful in making education and knowledge available for everyone for free.
Thus schools in Kerala are also called ‘pallikudam’(‘palli’ means church).

Chavara, in collaboration with Father Leopold Beccaro, O.C.D., founded the first native religious congregation for women in India, the Sisters of the Mother of Carmel (C.M.C.), in 1866.
Chavara died on 3rd January, 1871, aged 65, at Koonammavu, of natural causes.


He was baptized on February 17, 1805, at Chennamkary Parish Church in Alappuzha.
Kuriakose Elias Chavara was canonised by Pope Francis in 2014 November.