Brahmananda Swami Sivayogi was born on 26th August 1852 at Chittoor in Palakkad.
His real name was Karat Govindamenon.
He founded the Siddhasramam at Alathur. 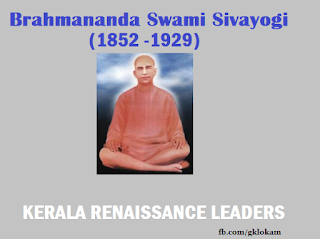 As an atheist, he denounced idol worship and religions.
He propounded the theory that Ananda (happiness or bliss) should be the touchstone of any human activity.
He founded Ananda Mahasabha in 1918.
The movement he spearheaded played an important role in the renaissance of Kerala society.
He encouraged liquour prohibition and women’s education. He criticised idol worship.