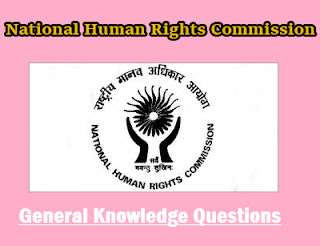 1. The National Human Rights Commission (NHRC) of India was constituted as an autonomous public body on:
Answer:12 October 1993

3.Where is the headquarters of NHRC?
Ans: New Delhi

4. NHRC was formed under the Protection of Human Rights Ordinance passed on:
Ans: 28 September 1993

6. Who appoints National Human Rights Commission  chairman?
Ans: President
The chairman and members are appointed by the president on the recommendation of a six-member committee consisting of:
✮The Prime Minister as its head,
✮The Speaker of the Lok Sabha,
✮The Deputy Chairman of the Rajya Sabha,
✮Leaders of the Opposition in both the Houses of Parliament and
✮The Central home minister.

7.Who has the authority to remove NHRC Chairman and its members?
Ans: President
The president can remove the chairman or any member from the office under the following circumstances:
✮If he is adjudged insolvent.
✮If he engages, during his term of office, in any paid employment outside the duties of his office
✮If he is unfit to continue in office by reason of infirmity of mind or body
✮If he is of unsound mind and stand so declared by a competent court
✮If he is convicted and sentenced to imprisonment for an offense.

8. NHRC chairman and members hold office for a term :
Ans; 5 years or until they attain the age of 70 years, whichever is earlier.

9. Who was the first malayalee to become the member of National Human Rights Commission?
Ans: Fathima Beevi

10. Who was the first Malayalee Chairperson of NHRC?
Ans: Justice K.G Balakrishnan