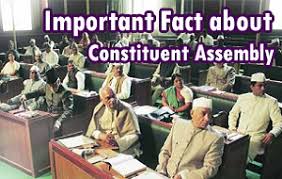 M.N Roy - The idea of Constituent Assembly to frame a Constitution of India was advocated for the first time by him. M.N Roy raised this demand in the newspaper 'The Indian Patriot' and he was also the first person elected to Communist International from India.
The idea of New Humanism is associated with him.

Dr. Sachidanand Sinha - he was the first chairman of constituent Assembly

Jawaharlal Nehru -  He acted as the chairman of the Union Constitution Committee. The famous Objective Resolution was moved by him on 13th December 1946 and it was adopted on 22nd January 1947. He described Preamble as the 'Soul of Indian Constitution'.

Dr. B.N Rau- He acted as the advisor of Constituent Assembly.

S.N Mukherjee - He is also known as the Principal Draftsman of the Constitution.

Sardar Patel - He acted as the Chairman of Fundamental Rights Committee, therefore he is known as  the architect of fundamental rights.
He is also the first Home minster of India.

Nandalal Bose- He prepared the layout of Indian Constitution.

IMPORTANT COMMITTEES OF  THE CONSTITUENT ASSEMBLY AND THEIR CHAIRMEN