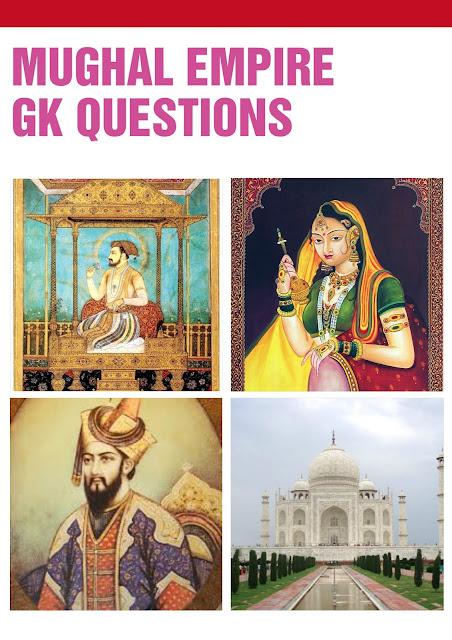 1. Who was the first Mughal emperor ?

2. Which sultan of Delhi was defeated by Babur in First Battle of Panipat in1526?

3. In which year Babur defeated Rajputs of Chanderi?

6.In which year was second battle of Panipat?

7. Who is the author of Akbarnama,which is the official chronicle of the reign of Akbar?

8. Which Mughal emperor built the red fort in Delhi?

10. Which is the religion founded by Akbar?

11. Which Mughal emperor prohibited use of tobacco?

12. Which Mughal emperor assumed the title of Alamgir?

13. Taj Mahal built by Shahjahan is on the banks of river:

15, Where did Aurangazeb die?

16. Akbar held his religious discussions in:

17.Who was the famous court poet of Akbar ?

20. What is the meaning of word  'Babur' in persian language?

21. Who was the first Mughal emperor who made an attempt to stop the Hindu custom of Sati?

22. What was the original name of Jahangir's wife Nurjahan?

23. Aurangazeb was the son of:

25. Which Sikh guru was executed by Aurangazeb as he refused to accept Islam?

26. Which Mughal ruler conferred the title of 'Raja' to Ram Mohan Roy?